The King of Herrings, also known as the Giant Oarfish, is one of the largest fish caught by conventional means in the game, and can grow to be well over 20 feet. They are the Monster Fish of the Safir Cave area. In reality, they can get even larger, growing to be over 40 feet and they are the longest bony fish in the world. However, it is not a herring at all, but related to the ribbonfish.

The King of Herrings in game has a very inaccurate head. While in reality, oarfish have a jaw that extends outwards and small eyes, in game, it is the exact opposite. The jaw, however, is an easy mistake, as the King of Herring's jaw does look like just its bottom jaw when closed.

Preferably, start looking for this fish after you have caught the White Sturgeon, the Hyneria, and the Electric Eel, as those will give you an idea of how this fish fights. Beware though, this fish is going to be a lot tougher than any of those fish. Look for a giant ribbon-like fish in the water. Use the X-999 Titan rod and X-009 Infinity reel combo because this fish fights really hard and may run all of your line if you use more inferior combos. Slowly approaches the fish and cast your bait near it (Rainbow Bait works best, but you may use Quick Hitter or Red Bait ). Patience is the key, as other fish (most likely Pudgy Cuskeel) tend to take the bait first and the King of Herrings itself may only nibbles and then simply vanishes afterward.

The King of Herrings leaping out of the water 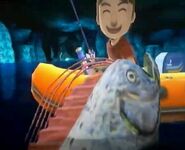 An example of a S-ranked King of Herrings

King of Herrings turn-in
Add a photo to this gallery
Retrieved from "https://wiifishingresort.fandom.com/wiki/King_of_Herrings?oldid=16334"
Community content is available under CC-BY-SA unless otherwise noted.